The Appalachian Mountains are old. According the US Geological Service they are around 480 million years making them, if not the first, then among the first mountain ranges to appear.

Old mountains breathe differently than their younger and more boisterous counterparts. The years have mellowed them, water has smoothed and carved them, and they have settled into their own unique ridges and lines. 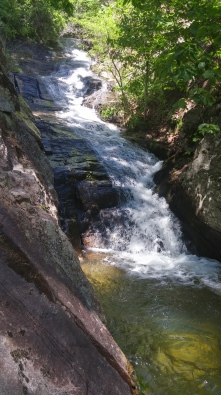 They are content mountains-sure of who they are and of the persistence of the people who live in them. The Blue Ridge Mountains, part of the Appalachians, cradle my home here in North Carolina.

The people who live in and around these mountains share the same quiet endurance as their mountains. You see it everywhere.

You see in their hands. Hands rough to the touch, spiderwebbed with cracks, and veins protruding bluely prominent and proud. In the tired shoulders of the farmer stepping into the seer stubble of his autumn field.

You hear it in the cadence of their voices as they call their “young’uns” into supper. In the rich regional dialect which is silently vanishing. Disappearing into hollows it once filled with resonance.

It echoes in the music-rooted in the old country-adapted for their new home tucked between swaths of  azure sky and granite craigs.

My Great-Aunt Margaret, born in 1925, grew up here and learned well the music of our mountains. She wrote a memoir in 1994 about her early life here.

As you read, can you hear the mountains too?

We didn’t go to the doctor much. Our ailments were usually treated with home remedies. As a child, I had a lot of ear aches. Mama would pour water over hot ashes from the fireplace put them in a rag, wrap that in a towel, and place it on my ears. It usually worked well.

Dad went to town once or twice a year in the wagon. He took a pattern of our feet and bought our shoes. The shoes were lace up with hook and eye and well up to the ankle bones. They were not pretty, but they were substantial.

Going to town was an all-day trip for Dad. He had to get the year supply of sugar. He bought it by the hundred pound sack- usually two or three. He had to sign his name to a paper saying the sugar would be used for cooking and canning purposes. So much sugar was bought for corn liquor stills they kept a record of people who bought over 50 pounds at a time. He would get salt and kerosene oil enough to last for 6 months at least.

All of our lamps were kerosene burning. I hated washing those dirty glass globes. Because I had the least hands (until I was about 11 or 12) I had a lot of those to wash. You had to be careful not to break those glass globes or someone with be without lamplight. We ate breakfast and supper and studied by lamplight-they weren’t so bright but they were better than a lantern or candles.

There were two or three big porkers killed every year. I made sure I wasn’t there to see any slaughtered. I loved the little pigs and petted them. The big 500 to 700 lb hogs would lie in the sun and grunt happily as I scratched their backs with a stick. Hogs were killed after it turned really cold. Usually that was around the first of November. Then came the work. Meat for sausages had to be ground with a hand grinder. After it had been seasoned properly by Mama then came the making of hundreds of sausage balls. They were fried on the big kitchen range that burned wood. The sausages were putting cans and were stored away for the cold winter mornings.

The rendering of the lard was a job I hated whether I had anything to do with it or not. The whole house was filled with the odor of hog fat being converted into the lard that Mama used to make cakes, biscuits, and bread. It was always a clear pretty white when finished and was stored in one or five gallon buckets. But what a greasy mess to render the meat into lard.

Work was a way of life on the farm there was always plenty to do and everyone had to do their share.

Crawford, Margaret. Memories of My Early Years. Self Published , 1994.

Julie is a full-time student currently studying English Writing at the University of Colorado Denver. She has been writing in some format for the bulk of her life, and eventually decided, why not pursue it as a career? She is passionate about people, but women, their inner strength, and their stories have a special hold on her interest. Julie’s fascination with the stories women tell is one of the driving impulses behind Julie’s contributions to this publication. Julie is also passionate about her family, books, cooking, books, nature, and did we mention books? View all posts by Julie Wright

9 thoughts on “Mountains and the Southern Woman”

What is your opinion?